Why I Used My SkillsFuture Credit to Learn Malay

I was thrilled to receive my letter from the Workforce Development Agency regarding my SkillsFuture credit earlier this year. Initially, I thought I was not eligible for it as I was still 24 years old at that time. Thus, when I got the letter, I was really happy.

Just a quick introduction to SkillsFuture: It is basically a new initiative where the government provides all Singaporeans aged 25 and above will receive an opening credit of $500 to learn new skills. The objective of this movement is to support Singapore’s next phase of development to become an advanced economy

After much consideration on how I would like to use my $500 Skillsfuture credit, I’ve decided to sign up for a Bahasa Melayu / Malay language class

Here is why I’ve decided to learn Bahasa Melayu

1) Bahasa Melayu is our national language

I was first inspired to learn Malay when I read an article on The Straits Times “Speak The National Language” in late 2014. It was written by the Dean of the Lee Kuan Yew School of Public Policy, Kishore Mahbubani.

In his essay, he shared that if other races in Singapore learnt Malay, it could help reinforce a sense of common identity among Singaporeans and strengthen our diplomatic communications and economic ties with our neighbouring countries.

He lamented that in most countries, most people speak their National Language. However, that is not the case for Singapore.

Today’s young Singaporeans, however, seem to have little contact with Bahasa Melayu and therefore treat it, for all practical purposes, as a foreign language, even though it is their National Language. ”

This  struck a chord with me. Reflecting on my past 24 years, I am rather embarrassed to admit that I was someone who didn’t have much exposure to the Malay community. This is because I’ve attended Christian/Catholic schools from kindergarten all the way to secondary school. Hence, it was only in JC when I learnt simple Malay words like ayam or rendang.

I only started to know more about the Malay culture and lingos when I made quite a few Malay friends through university, social media and work.

I believe that as a member of the dominant racial group in Singapore, I should do more to learn about other races.

In a 2013 survey by the Institute of Policy Studies and OnePeople.sg titled “Indicators of Racial and Religious Harmony“, researchers found that only 59% of Singaporean Chinese agreed that we can “learn a lot from other racial groups” compared to Malays (75%) and Indians (69%). 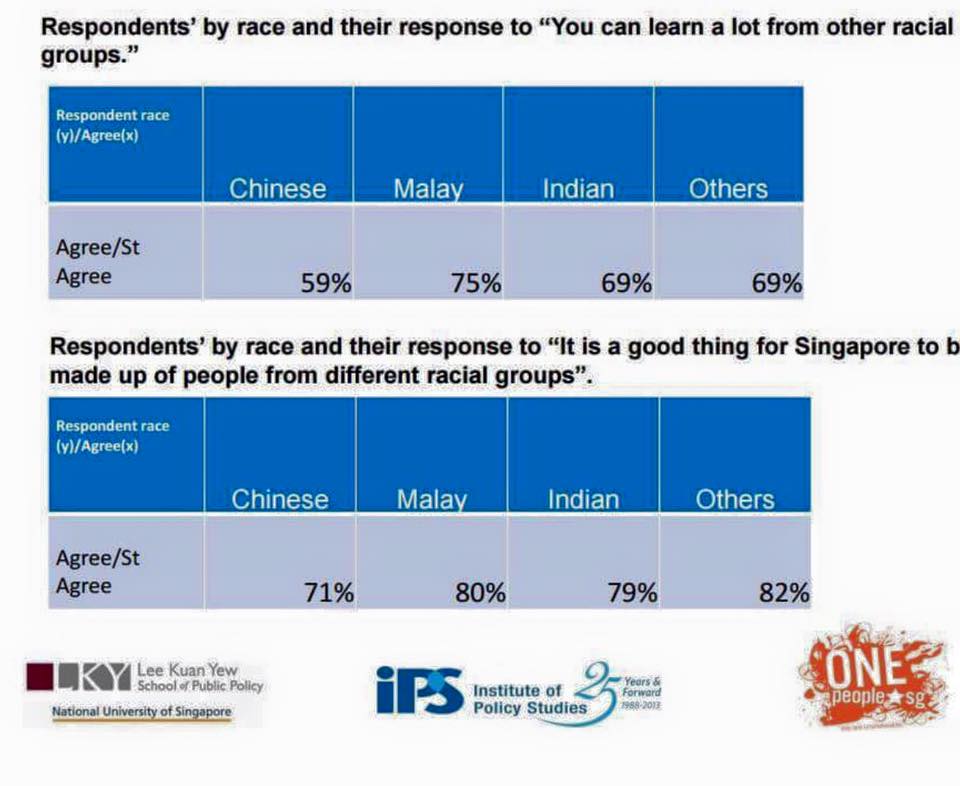 I feel that it is pretty disturbing that there are Singaporeans who believe that it’s not important to learn about another culture and also think that it’s not good for the country to be made up of different races.

I am guessing that is because Singaporean Chinese are the majority and seldom have to adapt to others in social situations and hence many do not see the need to learn about other groups.

However, I believe that if more Singaporean Chinese make an effort to understand the culture and languages of the minority, like how they have been adapting to us, we can create “a stronger sense of nationhood that binds together the diverse ethnic communities of into a strong Singaporean Nation”.

2) Learning Malay is useful for my career

The second reason why I would like to pick up Bahasa Melayu is due to my career goals. Contrary to popular perception, I am not a full-time blogger except for the period between June – September 2014 when I was going on my graduation trip.

In my full-time role, I work in the data and analytics industry. Starting June, I will be working as an Account Manager for the Asia Pacific region at a European big data and social analytics firm.

Learning Bahasa Melayu/Indonesia would be pretty useful for my career.

Overall, Southeast Asia is facing a technology boom but Indonesia is leading the way. Indonesia’s middle class is expected to double in the next five years, according to Boston Consulting group – and that means huge markets for e-commerce and tech social media companies.

In 2015, Indonesia had the highest digital and mobile internet ad growth globally. In 2016, more than one in 10 ad dollars in Indonesia will be spent on digital channels—including mobile—and in 2019, the share will exceed one in four.

Even if you’re not in the technology sector, you should also consider learning Bahasa Melayu/Indonesia. Indonesia is also predicted to become may the 7th largest economy in the world in 2030 (It is currently 16th place). It will also rank 4th in consumption power, after India, China and the US.

Given the rapid growth of Indonesia and the ASEAN community, when I was looking for jobs in business development and account management, I found that many of the job descriptions mentioned that it would be advantageous if the candidate could speak another Asian language i.e. Bahasa Melayu/Indonesia; Vietnamese; Thai; Cantonese. This is because many companies set up their APAC HQ in Singapore and are targeting clients from neighbouring markets.

Since we have many young graduates from Southeast Asian markets coming to Singapore, I hope to also equip myself with a strong grasp of one additional language to better compete with them and stand out in the job market.

I am particularly impressed by the educated Malaysian Chinese who can speak four languages fluently – Cantonese/Hokkien; Bahasa Melayu; English and Mandarin. My bestfriend is Singaporean but she grew up in Kuala Lumpur. Hence, she can speak these languages at native competency and it’d definitely be super fun to practice with her.

3) Malay would be useful for my volunteer work

I’ve been pretty active in volunteer work such as grassroots events and house visits. While walking the ground, I’ve noticed that besides vernacular Chinese languages i.e. Teochew, Hokkien, Cantonese, another useful language to know when striking conversations with residents is Bahasa Melayu.

I recalled an incident a few weeks ago when I accompanied NCMP Leon Perera during his house visits.

I was surprised to see that he could speak fluent Malay. I was pretty impressed when I saw how the language complemented his strong people skills and enabled him to connect so well with the residents living in the East through the language.

Besides Malay, I am also interested in Cantonese and Spanish. I like Cantonese because it reminds me of Hong Kong and the amazing time I spent there during my journalism internship in Hong Kong. Unfortunately, it is not offered under Skillsfuture currently.

As for Spanish, I love the language because I really like their culture and how warm and laidback these people are. Most of the musicians I like are Latin Americans or Spanish too i.e. Pitbull, Enrique Iglesias, Jennifer Lopez, Shakira and Don Omar. I learnt it when I was in university but to be honest, all I remember is “que no pare la fiesta” and “DALE!”

I am really looking forward to my first lesson in June and would be sharing my learning journey on Facebook. I hope that my Malay friends won’t laugh at me if I get the words wrong and would offer their support along the way.

To learn Bahasa Melayu online, you can check out this udemy course. What would you be keen to learn? Share your thoughts with me below!

My Response To Those Who Are Against The Singaporeans First Policy

5 valuable lessons we can learn from the tech layoffs

What I’ve learned about working with Solution Engineers

Should you change jobs or stay in your current role?

Which is the most accurate salary guide in Singapore?

As a Fresh Grad, should you work for the Public Service, MNC or a startup?

What are some flaws which makes the Singapore education system so stressful?